Hello people! Bella here with one more post today for you. After so long, I’ll finally write a new movie review on the blog. Read below to know what I thought about this movie<3 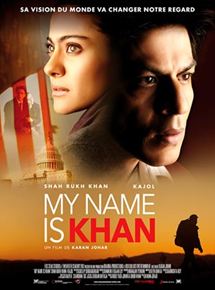 Summary: Rizvan Khan is a muslim that suffers from the Asperger disease and because of his religion, he is secluded from his wife after the 9/11 incident. With the hope of reconciling with his loved one he goes after the president of the United States to declare that even though he is muslim, he isn’t a terrorist.

Opinion: It has been so long since I’ve watched an actual good movie, because with so many tv shows displayed on Netflix, I spent more time watching them and left my love for cinema aside. However, yesterday I wanted to watch a movie that was actually worth my time and after a lot of research, I found this film and decided to give it a try. After all, I’ve barely seen foreign movies and its five stars rating was enough to convince me to figure out if they were well deserved. Without a doubt, it was the perfect movie to watch after a hiatus of extraordinary films. My Name is Khan, even though it isn’t based in a real story, is just as real as any other biographical film, with an engaging and reflective story. It reflects on how we treat people suffering from any kind of mental illness, how we treat people of other religions, and how Muslims are harassed because of terrorism .

The film directed by Karan Johar and brilliantly written by screenwriter Shibani Bathija, portrays the difficulties caused by the Asperger’s disease that I am sure many were not familiar with. But the actor who plays the protagonist with the disease is the real deal of this movie. After researching for the actor who played Rizvan in the film, I was impressed when I discovered he did not have the disease at all. The performance of Shah Rukh Khan is so convincing I was speechless and had to research to know if it was all an act. He undoubtedly deserves being recognized as “The King of Bollywood” and to be known in India as the best Indian actor of all time.

The actress who plays Shah Rukh Khan’s romantic pair, Kajol, also does not disappoint in her acting skills and there’s a certain point in the story in which actress captures with faith the sadness and post-traumatic stress that her character was undergoing. The two also convince viewers as a couple, effect the director wanted to purposefully cause when choosing them for the feature, since they have acted as a couple in many films and are loved by the Bollywood audience.

The soundtrack of the film was also very well chosen because each song has lyrics that fit well with the scenes and the photography is also ideal for this type of feature.

Although the film is almost three hours long, to me it was more worth watching than other famous films like Lord of the Rings and The Hobbit that have almost the same duration. It is like a complete package, since it makes you laugh, cry, reflect and impress you all in one movie. With no doubt it deserves more global recognition and to change the perspective of many. The five stars rating is well deserved and if it were for me, I would even give it more. Really sensational and a must see!

Favorite quote: “Just remember one thing, my son. There are only two types of people in the world, good people who do good deeds and bad people who do bad. That’s the only distinction among human beings. ”

For people who liked: Like stars in the sky, every child is special and Kabhi Khushi Kabhie Gham.